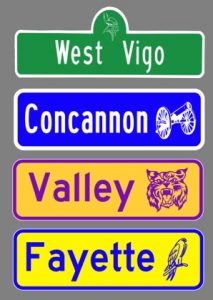 Celebrating “The Road to West Vigo”

In the late 1950s and early 1960s there was a movement to “consolidate” schools across the country to gain economies of scale in administration, instruction, and facilities. The Vigo County School System looked to this movement as a way to gain those benefits throughout the County and one of the earliest consolidations started with the public schools in the western portion of Vigo County – on the West side of the Wabash River.

It was the Fall of 1960 when West Vigo High School opened its doors for the very first time to students from Concannon High School and Valley High School.

To commemorate the journey of consolidation in 1960-61 an art piece has been designed.  It was conceived and designed to recognize the students and teachers of the three feeder schools.

Ryan Easton, principal of West Vigo High School, will do the unveiling during halftime of the homecoming football game on September 27th.  The wayfinding signs (shown) display the colors and logos of the founding schools in recognition of the Concannon Cannons, the Valley Bobcats and the Fayette Falcons that were brought together in 1960 and 1961 to create West Vigo High School.  The art is being donated to West Vigo by the Class of 1963 many of whom will be in attendance at the game.